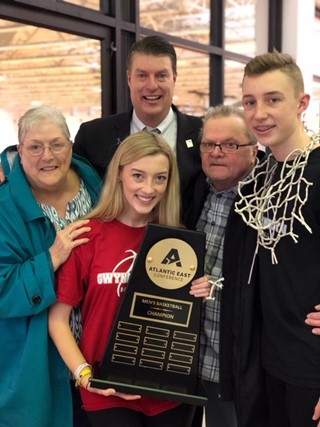 Over the last 18 seasons, Baron has accumulated a 340-159 overall record and he has guided his teams to the conference playoffs in every season along with a 224-78 record in league play. He ranks 24nd nationally in active coaches winning percentage and is ranked 49th all-time in winning percentage of all Division III coaches. Those 18 seasons include 10 20-win seasons, six conference championships, nine conference championship appearances, six NCAA Tournament appearances, four NCAA Tournament wins, an Eastern College Athletic Conference Championship, and numerous regional and national rankings over his time. On November 16th, 2018, Baron earned his 300th coaching win at the Widener Tournament in a hard fought 86-77 victory over Penn-State Harrisburg.

In 2019-2020, the Griffins posted a 23-7 record and earn a berth in its second consecutive Atlantic East Men's Basketball Championship game and went on to host and win the Eastern College Athletic Conference Division III Men’s Basketball Championship, marking the program's fifth-straight 20-win season. After graduating three starters and losing two all-league players from the 2018-19 group, the team had numerous question marks in various areas entering the season. Along came a determined trio of leaders on and off the court in first team All-Atlantic East selection Rich Dunham, Donaven Spencer, and Somah Slewion. Couple this trio with freshman starter Nate Walker and strong group fellow contributors and many of the question marks began to dissolve.

Dunham averaged 20.8 pts a game and a swift 51% shooting clip with a threatening 43% three-point shooting percentage. Walker, Slewion and Spencer were dynamic in big spots throughout the year and were key go-to guys in many close games. This group of seniors leave as the winningest class going 84-29 with a conference championship, three conference championship game appearances, an NCAA tournament win, an ECAC postseason championship, and became the program’s second-ever group to win 20 games in four-straight years. Along with Dunham’s First-Team All Atlantic East accolade, he also was named ECAC Tournament MVP and earned a spot on the D3hoops.com All-Atlantic Region Team. His career is laden with team and individual successes which include top 5 rankings in the career statistical leaderboard in 15 of the 17 categories and is first in program history in steals and free throw percentage. Baron is most proud that this senior class become graduates #63, #64, and #65 in his coaching career at GMercyU. 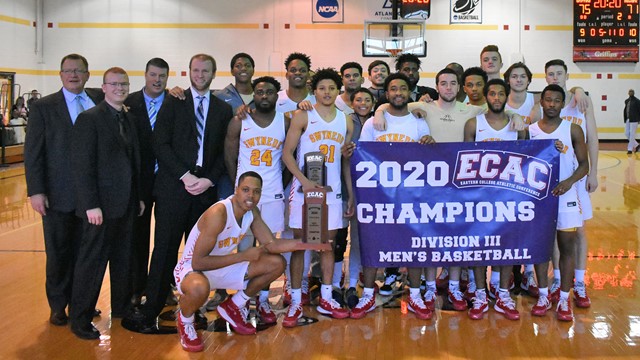 The 2018-2019 season saw the Griffins go 20-9 and capture the inaugural Atlantic East Men's Basketball Championship. This marked the program's fourth-straight 20-win season and the program;s fifth NCAA tournament bid. The team rolled into the NCAA tournament and was shipped out to Willliamstown, Massachusetts where they upset #17 ranked team Plattsburgh State, 73-65, before bowing out to the 10th ranked and host team Williams College in the second round.

The 2015-2016 squad was a another special group as they finished the CSAC regular season with 17-1 mark and continued into the conference tournament as the #1 seed. The Griffins were led by first-team All-CSAC and All-Atlantic Region Selections in Darnell Artis and Julian Hyden. Baron’s team played to a decisive 84-70 CSAC Championship game win and earned the league’s automatic bid to the NCAA Tournament. With a trip to Marietta, Ohio to play the country’s sixth-ranked team in front of an amazing crowd, Baron’s relentless team was able to pull out an exciting 86-85 victory over the hosts on a last second stop and then score to secure the win. The success of the team’s 22-7 overall record earned Baron his second CSAC Coach of the Year as well as Atlantic Region Coach of the Year by D3hoops.com, NABC Atlantic Coach of Year, ECAC South Coach of the Year, COBL Philadelphia Area Coach of the Year, and was a finalist of the Glenn Robinson/NABC National Coach of the Year.

Baron has also overseen the development of 31 all-conference performers, six all-region selections (Badou Gaye ‘05, Chris DelBrocco, ‘07, Dave Smith ‘09, and Dan DelConte ‘12, Darnell Artis ‘15 and ‘16, Julian Hyden ‘16, Rich Dunham ‘20), one two-time National All-American (Gaye ‘05), and 18 NABC Honors Court players which recognizes student-athletes with a cumulative GPA of 3.2 or higher. His no-nonsense approach to the game and education-first mindset is right in line with the athletic philosophy at Gwynedd Mercy.

The 2003-04 season started it all as Baron and his team impacted the league and the nation in just his 2nd season while guiding his team to a 26-3 record, winning the then PAC Championship and advancing to its first ever "Sweet 16" appearance in the NCAA Tournament. The team also earned a final ranking of #15 by D3hoops.com. For his efforts, he was named the PAC coach of the year from the league as well as the Philadelphia Small College Coaches Association Coach of the Year.

Coach Baron guided and mentored one of the greatest players in Gwynedd Mercy history, two-time All American and PAC Player of the Year, Badou Gaye. The 6-9 center went on to become the first student-athlete at Gwynedd Mercy to be drafted professionally as the USBL's Westchester Wildfire selected him in the second round of its draft in April 2005. Gaye played professionally in Europe from 2006-2008 and was then drafted in the first round of the National Basketball Association Developmental League (NBDL) in by the Idaho Stampeders, an affiliate of the Utah Jazz. Numerous other former Griffins have had success and opportunities to play professionally abroad.

The Griffins took their first-ever foreign team tour in October 2011, visiting Costa Rica and revisited the country in 2014 and plan to be in Costa Rica again Fall 2021. The squad played and practiced against Costa Rican Professional teams as a pre-season tune up tour. Baron has taken numerous summer All-Star teams of DII and DIII players to many countries such as Barbados, Germany, Austria, Italy, Costa Rica and Slovenia over his time. 2017 the Griffins took their third foreign tour as the team played in and around Toronto, Canada in early October. 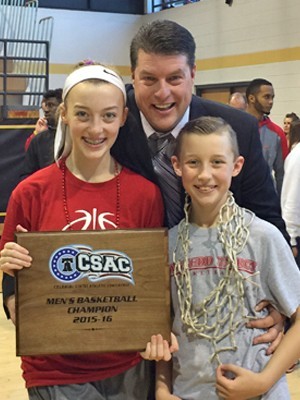 Off the court, Baron’s Griffin teams have also enjoyed tremendous success by staying highly involved with yearly community service projects and events. The Griffins run two weeks of summer basketball camp servicing over 300 local players from 2nd to 8th grades. The “Breathing room Foundation” is a special organization close to the Griffin program. Started by former Griffin assistant Coach Bernie Fitzgerald, the team participates in a 5k fundraiser and volunteers time at Thanksgiving and Christmas to deliver dinner and presents to families with a loved one facing cancer. The team’s time provides these families a little “breathing room” as the families face cancer in their household. Baron is also involved with the Philadelphia Branch of Coaches v. Cancer raising awareness and support for this cause.

Coach Baron has a consistent emphasis on education and studies. Baron’s teams mean GPA hovers around 3.0 mark each season.  He has graduated 65 student athletes through his 18 year career at the university and extremely proud of his continuous connection to ALL of his alumni and their families!

Baron began his coaching career in 1996 at Owen J. Roberts High School in Pottstown, Pa. In 1999, He entered the college coaching circle and served as an assistant at Ursinus College. The following year in 2000, he became an assistant Gwynedd Mercy (then College) before being named the head coach of the Griffins in 2002.

Coach Baron received his BA in Elementary Education from York College in 1995. He earned his master's degree at Penn State University in Education, Curriculum, and Instruction in 2004 and serves at the athletic departments’ Director of Academic Coordination. 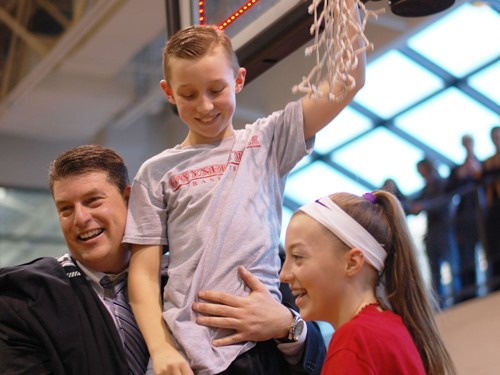